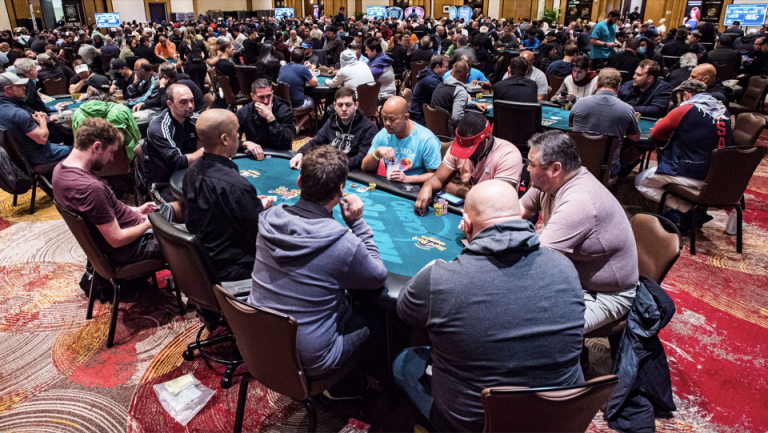 Although online poker games are a relatively new phenomenon, its popularity has exploded in recent years. This occurrence is due partly to the convenience and flexibility that online poker offers players, as well as the fact that people can enjoy it from the comfort of their homes. But how did online poker become so popular? And what is behind its continued growth? In this blog post, we will explore the history of online poker and examine some factors that have made it a success.

Online poker can trace its roots back to the early days of the internet. People played the game through the Internet Relay Chat (IRC), where they used a computer program to deal with and manage the games. This game was played using imaginary money but attracted a huge following from WSOP Champions like Chris Ferguson. The games offered at that time were only Texas Hold ’em and Omaha. A player account was limited to buying only 1000 chips per day, but there were no restrictions on creating new accounts, so some players made multiple accounts and “harvested” the chips in the games. The tournaments often started with the theoretical maximum of 23 players at one table and could be completed in less than an hour.

In 1998, Planet Poker became the first to offer real money poker games online. Although other sites offered poker games at this time, Planet Poker was the first to gain widespread popularity. It wasn’t long before other companies began to launch their own online poker sites, and by 2003 there were over 100 different sites in operation.

The popularity of online poker was largely driven by the “poker boom” of the early 2000s. This was a period when poker enjoyed a surge in popularity, thanks in part to the success of televised tournaments such as the World Series of Poker (WSOP). As more people became interested in playing poker, many turned to the internet in search of games.

Major online poker sites enticed players by offering different features of the game. The most notable feature is to offer tournaments called satellites by which the winners gain entry to real-life poker tournaments. It was through one such tournament that Chris Moneymaker won his entry to the 2003 World Series of Poker (WSOP). He went on to win the main event, which shocked the poker world, thus beginning the poker boom The 2004 World WSOP featured three times as many players as in 2003. At least four players in the WSOP finals won their entry through an online cardroom. Like Moneymaker, 2004 winner Greg Raymer also won his entry at an online cardroom.

The poker boom came to a halt in 2006, when the US government passed the Unlawful Internet Gambling Enforcement Act (UIGEA). This law made it illegal for financial institutions to process payments to online gambling sites, effectively cutting off the flow of money to these sites. As a result, many poker sites were forced to close their doors. Some poker sites, however, continued to operate and remained open to US players; the FBI later on investigated these sites for bank fraud, money laundering, and violating gambling laws.

Despite the setback caused by the UIGEA, online poker has continued to grow in popularity. There has been a resurgence in the US market in recent years, thanks to the introduction of legal and regulated online poker sites in states such as Nevada, New Jersey, and Delaware. And with more and more countries worldwide legalizing online poker, it seems likely that the game will continue to thrive for many years.

The COVID-19 pandemic has resulted in a massive increase in online poker traffic. Due to government-imposed constraints, the pandemic is believed to have directed professional and recreational players who typically prefer live poker to online platforms.

Additionally, the sudden collapse of live entertainment options due to the widespread disruption of the sports and entertainment schedules caused by the pandemic is believed to have resulted in more than the usual number of casual players turning to online poker as an option. Many online operators reported traffic of double or more than the previous volume, depending on the time of day.

Poker has come a long way since the early days of online gaming. Today, poker is one of the most popular online casino games, and there are many different sites where you can play. If you’re interested in giving it a try, sign up today with GGPoker, the world’s largest poker room. With over 10 million registered users, GGPoker offers great poker free games and plenty of opportunities to win big. So what are you waiting for? Sign up today and see for yourself what all the excitement is about!

7 Trick Moves to Learn in Poker